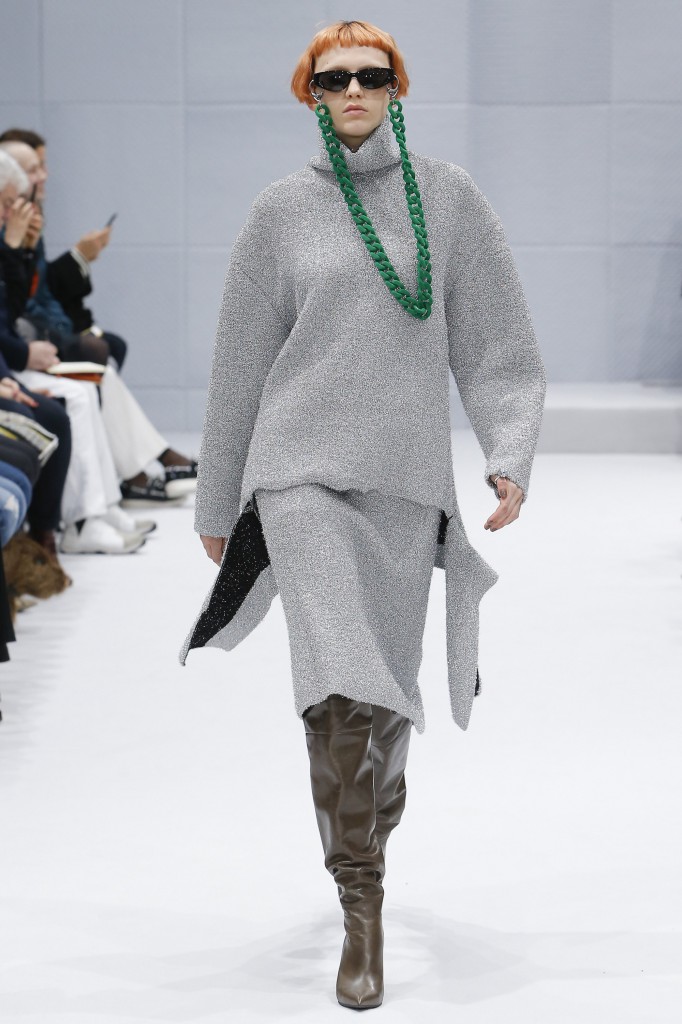 “How do you persuade a woman to wear a two-piece suit who is not the German Chancellor?” asked Demna Gvasalia, who has spent the last six months looking into the Balenciaga archive and methodically thinking through how the essence of Cristóbal Balenciaga can be relevant for a modern woman. Result One, the first look: a gray flannel two-button jacket and a slit pencil skirt, in which the shoulders are slightly curved and set fractionally forward, and the hips minimally padded. “It was the posture and the attitude, and Cristóbal’s way of working with the body I found interesting,” said Gvasalia, while admitting to nerves in the buildup to his debut. “Cristóbal was about the tailoring. I wanted a new way of finding that elegance for today, in a 360-degree way.”

Gvasalia wasn’t just talking about the profile created by the forward-leaning technical cut of the coats and jackets, the whoosh of volume in the fronts of skirts, and the inward-angled stiletto heels. This was a “profiling” in a much bigger sense—a pragmatic, intelligent, sweeping analysis of whole categories of what women might want to wear on a daily basis, if they care about fashion—or, rather, about dressing well. The effect was a surging visual high for women of many ages who saw, among the glittering earrings, taut ski pants, jeweled stilettos, oversize puffers, padded scarves, soberly chic checked sheaths and multi-floral dresses, an inspiringly whole and succinct set of wardrobe desires answered.

“I started by making a list of garments, which is what we do at Vetements. Like the shirt, the coat, the trench coat, the aviator, the floral dress, the sweater. Then we drape—I never do sketches,” said Gvasalia. “And then we ask ourselves: Friends would like to wear it? We asked Eliza, the girl with the glasses, who closed the Vetements show, to open Balenciaga. And she said, ‘Oh, a business suit! I like this!’”

The influential Vetements collective, which is led by Demna and his CEO-brother Guram, has swept fashion over the past 18 months with a reputation based on upgrading streetwear to boiling-point desirability. Gvasalia’s ability to look at a generic garment with new eyes was at work here, too, filtered through the Balenciaga lens. “We saw his amazing opera coats, and then I thought we could do these open, pushed-back necklines with these, like big Helly Hansen jackets—or with the trench coats,” he said. Realistic, useful bad-weather outerwear, with a fashion punch, done and dusted.

The exercise of finding points of cross-reference between a contemporary designer and the storied, often obscure oeuvre of a long-dead designer can often seem forced, sterile, over-academic, even creatively crippling. But in the case of Gvasalia, the surprise element is that he is coming at this task as a grownup who knows his priorities and doesn’t feel the need to over-egg reverence to the house. He laughed that it only struck him that the floral dresses—brilliant “tents” made from collaged scarf prints with sexy flashes of candy-striped legs beneath —were “a little bit Spanish,” as they were draping them. As Vetements watchers will also clock, floral dresses are transfers from last summer’s wildfire hit from the collectives’ label. Here, what started life as an upcycled old tea dress, which also holds memories of folk patterns from the Gvasalias’ native Georgia, has reached its 2016 apotheosis as a high-fashion object of desire.

Gvasalia also approached the vexed task of designing bags with the same method of boosting the ordinary till it becomes extraordinary. (Who needs yet another collection of fancied-up receptacles?) “We just thought they should be useful, so one is based on a toolbox, one is a cycle-bag, and the ones at the end are market bags,” he said. Of course, appropriating “found” objects is the practice set out by a different maestro of fashion, Martin Margiela. As it happened, Linda Loppa, the elegant woman who taught both Margiela and Demna Gvasalia at the Antwerp’s Royal Academy of Fine Arts, was moving through the crowds of happy women who were pressing backstage after the show. Did she know Gvasalia was destined for success? “He had it already—the precision, the tailoring, and the humility,” she said. “I don’t think I had to teach him anything!” And then she smiled, serenely, speaking for every woman in the place. “I think I’ve found my new label today.”