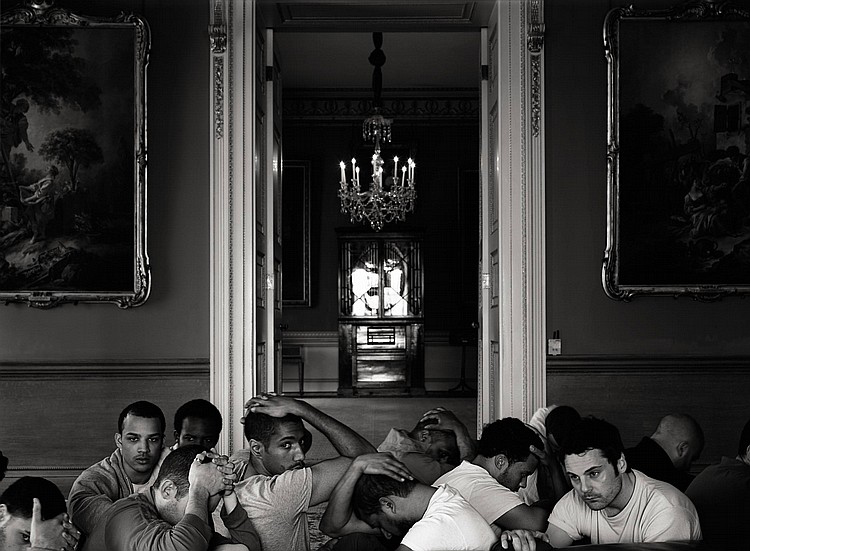 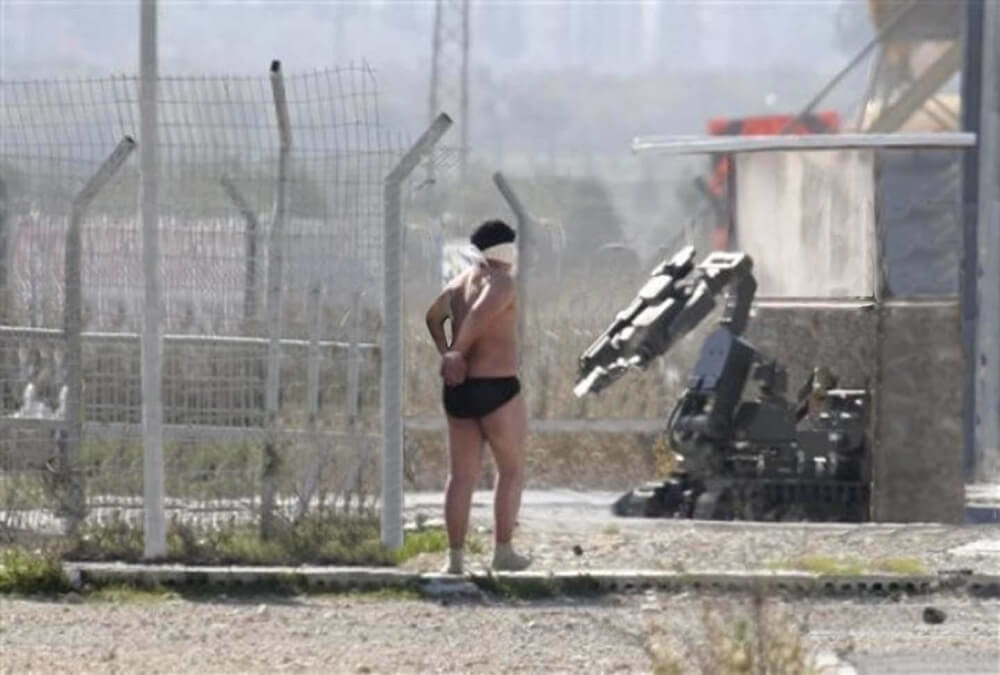 The work of Reza Aramesh, on the face of it, may seem to utilize relatively traditional forms of media; namely, sculpture and photography. However, it is important to note that his work has a performative element to it inasmuch as the images we see in both his photographs and the poses of his sculptures have often been restaged by individuals taking their cue – with the artist’s guidance – from newspaper photographs and other visual material.

Since 2008 Aramesh has used media images of conflict from around the globe as sources for his numbered ‘actions’, re-enactments of scenes extracted from such images and staged, somewhat anachronistically, in slick modern apartments, stately British mansions, and art-filled museums. Documented as black and white photographs, these surreal transpositions serve as cruel reminders that such accumulated wealth is usually the result of war, conflict and oppression elsewhere, both historically and in our contemporary moment.

Aramesh prefers using amateurs in these ‘actions’, which feature a changing all-male cast drawn from Britain’s immigrant communities, who appear dressed in their everyday street wear; additionally, no weapons or other instruments of violence or torture are included in the re-enactments. Lacking such specific references, the ‘actions’ distill episodes of violence and conflict into studied tableau, each a particular configuration of poses, gestures and expressions. Events unfold as compositions and experience is recounted through physical and spatial relationships between individual figures or discreet groups. And while each ‘action’ bears a long subtitle – often the news caption that accompanied the source photograph – this neutral, factual description reveals little, and leaves one unable to fully locate Aramesh’s image in a specific time and place.

These forms of re-staging and re-framing – referred to as ‘actions’ by the artist – are integral to Aramesh’s work and the source material is often drawn from conflict zones worldwide; the very same zones that often crop up in our daily glut of print and televisual media.

As viewers we are bombarded with these images until they lose their sense of context and meaning. How, then, do we reinvest these images with meaning and thereafter a degree of critical purchase? It is at precisely this point that Aramesh’s images come into their own. In the restaging of the original  image, with the help of volunteers, the artist transposes a group of Palestinian prisoners into the environment of Cliveden House, a one-time stately home in England and now a luxury hotel. Aramesh reinvests this image, in sum, with an uncanny immediacy. What was once familiar, if indeed over-exposed in our media-saturated eyes, becomes unfamiliar and thereafter unsettling.

There is also another critical element at work here. In Aramesh’s transposition of these scenes and their restaging in other environments, he often leaves out the source of threat and original violence that existed in the source photographs, be it in the form of prison guards or soldiers; all are largely ‘in absentia’ in the final photographs. Whereas in the source images, the victim and victimizer, prisoner and prison guard, the living and the dead, all appear to be replaying history’s lamentable refrain of the victor and the vanquished, in Aramesh’s finished images such binaries are absent and so too are the certainties we associate with them.

Inspired by an exhibition of religious sculpture from seventeenth-century Spain entitled The Sacred Made Real that Aramesh saw at London’s National Gallery, his sculptures seek to (and accomplish) the reverse, imbuing documentary images of men forced to submit and suffer with the dignified aura of the sacred. Transfiguring experiences of humiliation into exquisite embodiments of heroic self-sacrifice, they are modest monuments to the human capacity to endure.

As viewers of this work, we potentially step into the realm of being a perpetrator in this symmetry of violence and fear. What place, if any, do we have here as we approach these abject figures: are we potentially victims ourselves, potentially subject to the precariousness of what Giorgio Agamben refers to as ‘bare life’, a life beyond recourse to law and justice? Or are we victimizers in waiting, fearful that for all our empathy there is a fine line, in times of conflict and the suspension of law, between being subjected to violence and administering it?